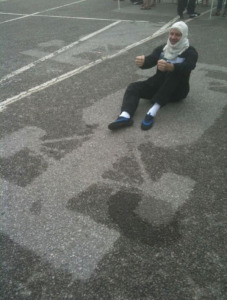 Larry Dunn of Landex Capital Corporation recently brought six people for the half-day Wings and Slicks experience.? The first session was just about to get underway and the cars had been pulled from the trailer when a brief shower of rain arrived.

The shower ended quickly but left a distinct shadow on the pavement where each race car had been.? Everyone had fun joking about the shadow including one participant who demonstrated how to drive the “invisible car”.? Within a few minutes the pavement was dry and the drivers settled down for some serious fun. Participants in these sessions really enjoyed themselves? – the photo speaks for itself.

The fun then continued throughout the afternoon with another session of fifteen people, so Saturday, August 13 was a very busy day.